I’m a new “HAM” and although an “Extra” with the highest level of amateur license available, I’m new and still have a LOT to learn about Amateur Radio. License does not = skill or experience and I learn something new every day.  I’m a member of the Amateur Radio Relay League (ARRL) and I highly recommend that anyone even considering ham radio check out their web page and resources.  Think of them as the NRA for Ham Radio.

As a kid I was always fascinated that I could tune in late at night to long distance AM stations on the old transistor radio.  I taught myself electronics and played with CB’s (yes, I admit it) and was studying code for my novice ticket back in 1984 when I joined the greatest nuclear powered Navy in the world – the U.S. Navy. Between duty station transfers and kids I never had the chance to get back into the hobby but I had a lot of intense electronics training.

In the early summer of 2012 I got the bug back and decided to get my license. I studied hard for a month for the Technician and General Licenses and just three weeks prior I thought I’d give Amateur Extra – the highest level – a shot.  I used the Gordon West WB6NOA Extra Class book and audio CD’s and studied every spare minute.  I also used Ham Test Online for practice exams.

I contacted the Mount Vernon Amateur Radio Club who generously sponsors free licensing exams to anyone that is ready and arranged to take my exams on Aug 13, 2012.  I arrived early and was one of the first in the testing room and after just 10 minutes I passed my first Technician Exam. Then I passed the General Exam 15 minutes later. Then I passed my Amateur Extra exam 15 minutes later. Missed a total of 7 questions on all 3 exams though. 🙁  Triple Play!

A couple days later I checked the database and found I was assigned callsign AK4XM.  Shortly after that I applied for and was assigned “vanity” callsign of WE3M on October 9, 2012  It has no particular meaning for me except for the fact that it’s very easy to say in voice and CW (Morse Code) and as a bonus if you write it and flip it upside down it still reads WE3M.  Or if you write it in a block like this and rotate it stopping every 90 degreesand it still reads WE3M!

What is Ham Radio?

I hear questions all the time from family and friends alike such as “Why do you need old technology Ham Radio in a world that’s connected by the high tech internet and cell phones?  You can talk to anyone around the world on Facebook!”  Perhaps, but 1) you really don’t know who that other person is; 2) you’re computer or cell phone are only smaller parts of a larger system that depends on that system and on a separate power grid to work.  No cell tower or computers or power and you have no connection to anyone.  That and you haven’t see my high tech station or realize that I use digital modes that surpass even voice communications.

My Ham Radio needs electricity too and perhaps a computer but when the power is out, the internet is down and cell phones no longer work I can run from generators, batteries or even solar power if necessary.

Here’s a great article why Ham Radio is even more relevant today than ever before!
http://www.technewsworld.com/story/75830.html

We also provide a valuable and necessary public service and assist local, regional and federal authorities, volunteering our stations and time to assist in good times and in bad.  From assisting with security at marathons to emergency comms during disasters, ham radio has silently helped our communities for a hundred years.  When tornadoes, tsunamis, hurricanes or even man-made disasters like 9-11 and the Boston Bombing strike, Hams have helped get messages in and out of those areas when all other means have failed. http://www.arrl.org/public-service 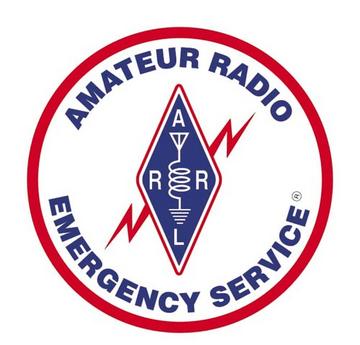 Have you ever heard of SKYWARN?  Probably not, but I can guarantee you’ve benefited from the program.  Many hams like me have radios in our cars and that means many eyes on the ground that can report immediately on the local weather conditions directly to the National Weather Service NWS and NOAA.  I recently volunteered to be a SKYWARN Spotter and am awaiting the formal Severe Weather training from a certified NOAA Meterologist.  If you ever listen to the NOAA Weather Radio, at the end of the reports you may hear “Spotter activation (not) anticipated” and that’s our signal.  That and e-mail and listening to the radio net on certain frequencies.

My radio isn’t a typical radio, it’s a “Software Defined Radio”, that black and grey box to the left of the monitor in the pic.  It has no buttons, meters or knobs and requires a fast computer to perform some excellent digital signal processing.  All the frequency controls, buttons, dials and knobs are displayed on the screen and controlled by the mouse.  It’s a stock 100W Flex 5000A/dual RCV and a Heil PR-40 mike.  Here’s a pic of my radio station: 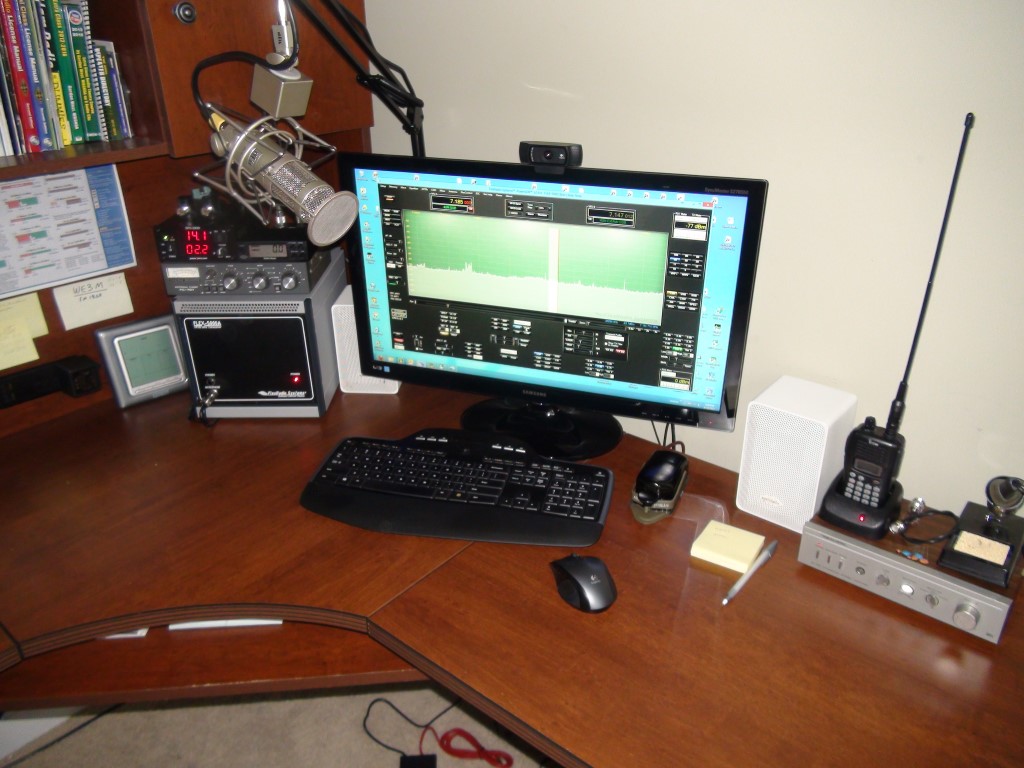 It’s always fun to think that I can communicate with someone on the other side of the earth with a piece of wire in my attic on the power of a lightbulb.  But believe it or not, that’s not the farthest.  Sometimes there’s very bad ionispheric conditions between you and someone just 2000 miles away so the best way to talk in that case is to use a directional “beam” antenna to direct our signal IN THE OPPOSITE DIRECTION!  We call that “long path” but even that 22,000 miles is not the farthest!

There’s a form of Amateur radio communication is called “EME” that stands for Earth-Moon-Earth and it means exactly what you think it means.  With special antennas and gear we can now bounce our signals off the moon and back to another Ham on the other side of the earth, the total length of the round trip for our signal is around 472,676 miles or around 760698 kilometers!  We routinely talk to the International Space Station (ISS), send signals through satellites, bounce signals off the ionization caused by the Aurora Borealis and even the ionized trails left by meteors know as “meteor scatter“!  Why again you ask?  Because we can and it’s cool!
For confirming contact with operators around the world, the old way was to trade QSL cards – customized postcards with information about us, our station and the dame and time of the contact.  We still use QSL cards, but it can get expensive so many now use online logbooks and electronic QSL cards.  I use the following:

And as soon as I get my QSL cards from the printer will be sending those out also.  Here’s what my first attempt at a QSL card looks like: 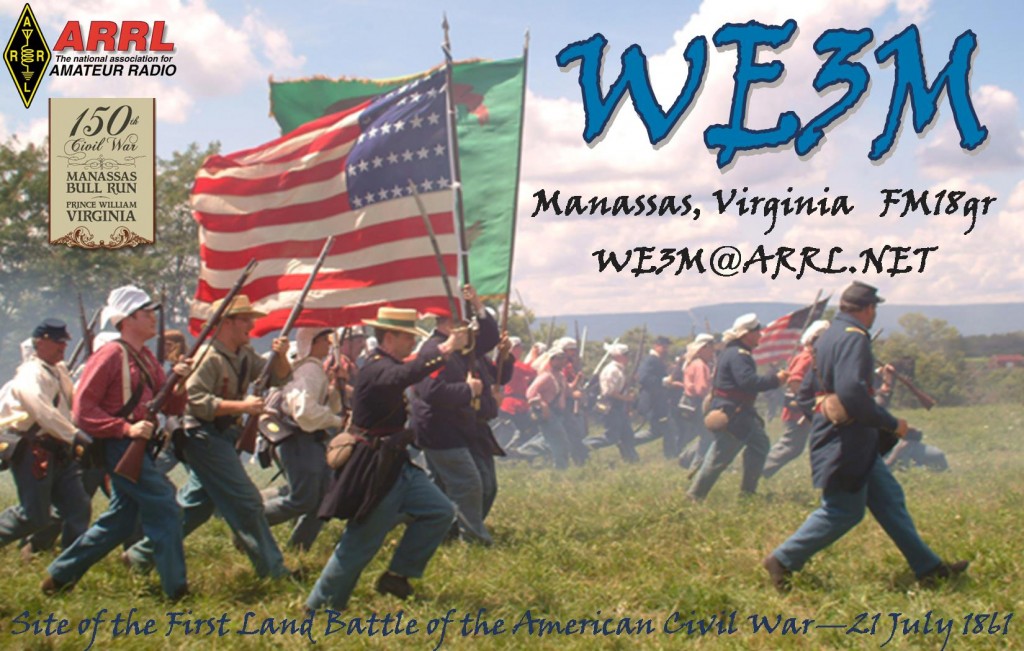